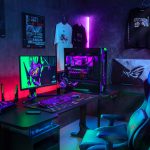 Following MSI’s announcement that it would launch Evangelion-themed components, Asus ROG is also introducing a collection based around the EVA-01 design. Besides core PC components, Asus has unveiled a network router, peripherals and even clothing that takes design cues from Evangelion aesthetics.

In addition to these PC components, Asus ROG is also launching a Rapture GT-AX6000 network router and a Strix XG27AQM monitor featuring EVA-01’s green and purple colour palette, as well as a Delta S headset, a Strix Scope RX keyboard, and a Keris Wireless mouse. Additionally, those looking for the complete set of gear can get a Scabbard II mousepad using the same black and red aesthetics as the Thor PSU and the Ryujin II cooler.

And if that isn’t enough for you, Asus is releasing a black sweater and two T-shirts (black and white), each with its own Evangelion-based design. The pricing and availability of the products have yet to be announced.

KitGuru says: Does any of the new Asus ROG Evangelion-themed products pick your interest? Which ones would you be willing to spend your money on?