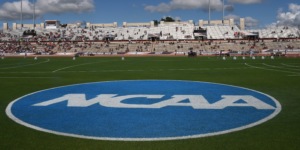 For Some Pro Athletes on Visas, The Future Isn’t Guaranteed

Defensive back Tevaughn Campbell signed a one-year, $965,000 free-agent contract with the Jacksonville Jaguars last month. He’s yet to truly catch on with an NFL team in the last three seasons, but his situation is even more complicated beyond that.

Campbell was born in a far-distant land known as Canada.

“I am not sure that’s ever held me back, but I know there have been questions when we’re talking to teams,” Campbell told Front Office Sports. “You’d hear, ‘He’s Canadian. We need to get him a visa.’ That’s something 99% of the players in the NFL don’t have to deal with.”

Charlotte-based immigration attorney Sherrod Seward has helped more than 1,000 athletes on every continent minus Antarctica secure visas over the years, including Saskatchewan native Campbell, who got his P-1 visa — good for one year, with an option to extend.

More than 20,000 international NCAA athletes are left out of an estimated…

Earlier this year, Seward sued the federal government to make the P-1 visa process easier for athletes, securing a ruling that disentangles athletes’ documentation from the sports leagues employing them, allowing a crucial sense of security.

Campbell was drafted in 2015 — by the Canadian Football League’s Calgary Stampeders.

After bouncing around Canada’s pro league, he signed his first NFL contract with the New York Jets in 2019. Then he was cut in training camp and quickly signed by the Los Angeles Chargers to be on their practice squad.

“I remember going to the Chargers, and I couldn’t get paid because I had to apply for another visa,” Campbell said. “I had to leave the country, fly back to Toronto, and then fly back to California.”

Campbell eventually made his way onto the Chargers’ active roster, where he played 30 games over the 2020 and 2021 seasons before his release in August  — but this time with the benefit of having his visa tied to his agency.

“It’s a tricky thing when you’re playing in a team sport like the NFL, where you can be cut at any time,” said Paul Sheehy, founder and president of the ProStar Sports Agency that reps Campbell. “That’s the transient nature of the NFL. Guys get hurt all the time and get released. It’s very problematic when that happens because that can change your [immigration] status.”

The NFL has held games in four countries outside of the U.S.

“Teams could be calling, but I couldn’t go because I didn’t have a visa before the step that we took that ties your visa to your agency,” said Campbell, who began the season on the Las Vegas Raiders’ practice squad. “Guys don’t change agencies often, but you could find yourself playing in a different city in a 24-hour span, and you’d have to wait on your visa.”

“Doing it with the agency as the sponsor really eliminates all of that interruption of employment,” Seward said.

Seward said combat sports make up about 60% of his business, one he actually stumbled into while at Cleveland State University College of Law. He interned at the North American Allied Fight Series (NAAFS), an Ohio-based regional MMA outfit where former UFC heavyweight champ Stipe Miocic got his start.

“That’s how I got to know the industry, and years later, I got two immigration calls on the same day,” Seward said. “One was for somebody who wanted to enter the country to get married, the other for an Olympian from Nigeria. I looked at the time I spent on each one, and it was a no-brainer.

“So I stopped accepting applications that didn’t involve sports, and stuck with it.”

Seward sought an injunction with USCIS and the Department of Homeland Security two months later, using Dudakova’s First Round Management agency as the designated “U.S. Agent,” as opposed to a sanctioning body that isn’t renowned enough to make obtaining a visa easier.

“I had one Filipino national team basketball player get denied,” said Seward, who was trying to get the player into the country so he could compete in Overtime Elite last year. “The reasoning was because they didn’t feel being part of the 12-member Filipino national basketball team was a significant accomplishment.

Overtime raised $100 million in a round co-led by Liberty Media.

“I argued that there are 40 million people who play basketball in the Philippines, and he was good enough to have one of the 12 spots on the team.”

A major part of Seward’s job is to convince the USCIS that the athlete he represents merits entry via a P-1 visa — a process that went smoothly for Seward’s clients like championship boxers Canelo Alvarez and Tyson Fury.

Russia’s invasion of Ukraine has made the process much more burdensome for Russians seeking to compete in the U.S. The American embassy in Russia stopped processing non-diplomat visas in April.

“We’ve had to send them all the way around the world to find places to interview [at other embassies],” Seward said. “We started off sending them to Mexico before Mexico changed its rules. Then we used the Dominican Republic before the rules changed there. Then it was Bahrain before we found Turkey, which is where we send them now.”

“What’s beautiful about this is that it’s already helped so many people,” said First Round Management CEO Malki Kawa, who represents Dudakova along with FSM European director Lukasz Orzel. “It’s become a very seamless process.

“I’ve known Sherrod for more than 10 years, and we’ve done business together for a very long time. I am proud of the fact we sued the government and won, and now we are allowed to help a lot of fighters realize their dreams.”

What initially opened doors for individual fighters now gives itinerant NFL-ers like Campbell a bit of breathing room in a very precarious job market in a foreign country. “This definitely benefits a lot of athletes,” Campbell said.

The post For Some Pro Athletes on Visas, The Future Isn’t Guaranteed appeared first on Front Office Sports.