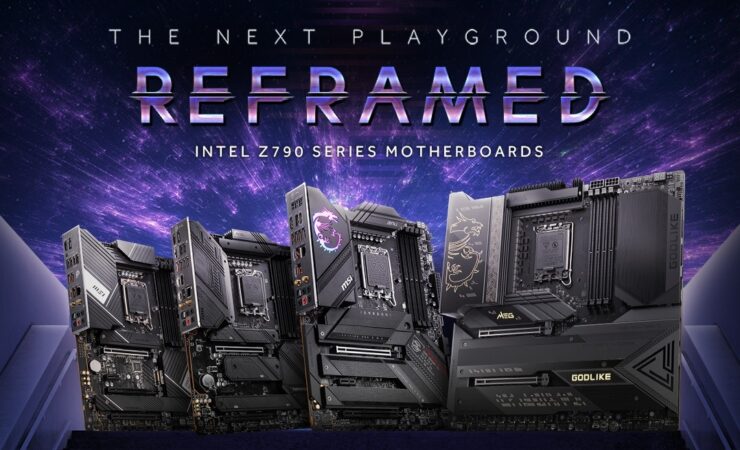 Intel has officially announced its 13th Gen Raptor Lake CPUs and to accompany it, motherboard manufacturers will be launching their latest Z790 products.

Intel is sticking with its LGA 1700 platform for at least one more CPU lineup and that’s Raptor Lake. Chipzilla confirmed that Raptor Lake CPUs will be compatible with the existing LGA 1700 boards based on the 600-series chipset. But like each generation, motherboard makers will be offering a brand new lineup of motherboards based on the 700-series chipset which will come with higher I/O lanes. In addition to that, Raptor Lake chips will be supporting DDR5-5600 speeds which is a nice bump over the native DDR5-5200 speeds that Alder Lake supports.

The Intel Z790 chipset will offer 20 PCIe Gen 4 & 8 PCIe Gen 3 lanes while the CPUs will feature 16 PCIe Gen 5 and 4 PCIe Gen 4 lanes. We know that the motherboard maker will have a few products which will split the x16 discrete graphics card lanes with an x4 PCIe Gen 5 M.2 slot. Intel won’t have native PCIe Gen 5 M.2 support till 14th Gen Meteor Lake chips.

This offers a nice upgrade path to users who are currently running a mainstream Core i3 or Core i5 CPU and want to upgrade to a higher-end chip. They can simply replace their existing 12th Gen CPU with a higher-end Core i7 or Core i9 SKU which will increase the overall performance of their PC.

ASUS has so far announced a total of ten motherboards that are a part of its ROG Maximus, ROG STRIX, PRIME & TUF Gaming families. The lineup includes:

MSI has announced a total of 14 Z790 motherboards within its product portfolio that range from MEG, MPG, MAG, and PRO series offerings. The lineup is the most diverse of all manufacturers & includes:

ASRock also has a vast array of motherboards within its Z790 product lineup including the flagship Taichi series. The motherboards include:

Gigabyte is announcing only four Z790 motherboards, for now, three of which are part of their AORUS lineup and one which will be featured in their AERO lineup. The company also plans on launching more mainstream offerings but hasn’t detailed them as of right now.

EVGA has prepped up two Z790 motherboards, one in its iconic KINGPIN line and the other in its Classified line.

Biostar has also announced two motherboards within its Z790 product lineup which includes the flagship Valkyrie.

And lastly, we have NZXT who will be offering their next-gen N7 Z790 for Intel’s 13th Gen Raptor Lake Desktop CPU lineup.

The Intel 13th Gen Raptor Lake CPUs and the Z790 motherboards which we have mentioned in this post are going to hit retail shelves on the 20th of October and while several stores have already listed them, there doesn’t seem to be an option to pre-order them so far.

Which manufacturer’s Z790 motherboards are you most interested in?