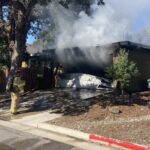 Contents hide
1 Fire was contained to garage
2 Share this:
3 Related

Fire was contained to garage

First arriving firefighters found a single-family dwelling with fire showing from the attached garage and impinging on the house. The fire was contained to the garage with minimal smoke damage to the rest of the structure.

Two fire engines, one truck, and two battalion chiefs from Paso Robles responded. Under the city’s automatic aid agreements one engine from Atascadero and one from Cal Fire responded as well. A total of 21 firefighters responded to the incident. Assistance was also provided by San Luis Ambulance and the Paso Robles Police Department.

The cause of the fire is still under investigation.